With the cancellation of all in-person orientation events scheduled for May and June, the Office of Orientation has begun the process of converting orientation to an online experience.

Robert Lagnese, who has served as director of orientation for over 20 years, said that orientation is important for building a peer network before incoming freshman begin classes.

Lagnese’s goals for the online orientation are to mirror a typical orientation agenda and to include interaction with faculty members and the 11 orientation ambassadors. The Office will also ask faculty and campus offices to create videos for this online experience.

The web-based orientation will be broken into two different virtual experiences: one for students, and the other for parents. Both experiences will be accessible to all parents and students.

Throughout the month of June, the orientation ambassadors will host Zoom sessions on Fridays to answer questions from incoming freshmen and oversee virtual icebreakers as well. Eight of the 11 ambassadors are new to their job, and the majority of the ambassadors are current freshmen.

“I think students will quickly engage with it as well and it will give us talking points and the ability to further communicate with students who have similar interests and majors and needs and backgrounds and those kinds of things,” Lagnese said.

Lagnese also said the programing will be spread throughout the summer, which was not previously possible with the typical one-day orientation experience.

Students will also receive information on their fall schedule, financial aid, CORE and Handshake. While students normally receive their ID cards at orientation, they will receive information on how to get their IDs at a later date. According to the SRU first-year orientation webpage, fall schedules for incoming students should be completed by June 1.

Lagnese advises all incoming students and their families to check their emails for more information as it becomes available.

“Know that the entire campus has come together to make sure that what we would have done comprehensively in an actual program orientation, we’re going to provide seamlessly through a virtual experience,” Lagnese said. “I would say rest assured that we’re going to give you everything you need when you need it to be successful in your transition here for the fall.” 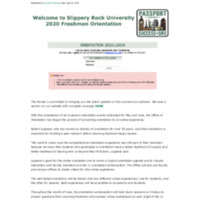