After speaking with some of her Campus Edge residents on Friday, Kristin Pascoe, general manager of Campus Edge and Slippery Rock Garden Apartments, learned that some of her own residents were struggling to afford groceries.

After leaving her office on Friday, Pascoe posted on Facebook to ask her local friends for nonperishable food donations for her residents. According to her post, 90% of her residents are students.

This post was shared over 380 times, according to Pascoe, allowing Campus Edge management to set up a table of donated items in the clubhouse.

“It was just a very simple Facebook post that was intended for my local friends in Lawrence County,” Pascoe said. “I did not expect it to get shared over 380 times all over the United States.”

Throughout the weekend, Pascoe said Campus Edge received about 54 Amazon packages from anonymous donors along with another 50 boxes from donators nationwide, with one package being shipped from Texas.

“So it’s literally hundreds of people who have donated,” Pascoe said.

The groceries and personal hygiene items are available to any resident of Slippery Rock who may be in need. Pascoe also said that these donations are also for students who are struggling to pay bills so that they can pay bills instead of worrying about groceries.

“I’m completely blown away by the hearts of everyone and it’s literally nation wide where they’re coming from just to help,” Pascoe said. “It’s amazing.”

Pascoe said that she is emotional from the response to her initial Facebook post from less than one week ago.

“If there’s anything good that can come out of this whole coronavirus, it’s that we all have come together, we’re all helping each other,” Pascoe said. “Definitely very emotional.” 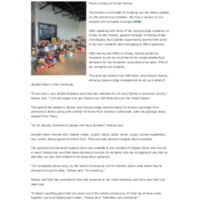