“We are absolutely empathetic regarding the situation and challenges the COVID-19 pandemic is creating, as well as the impact it’s having on everyone,” Magnelli said. “We have been actively researching local and national financial support resources that we can refer residents to even as we get updates on legislation and other relief resources. We have also been working with residents on waiving late fees for payments as well as [setting] up payment plans or working through any hardships they may be eligible for.

“Given we are a private operator, we are independent from the University and as such, our leases are not connected to the University’s operating status or whether or not school is in session,” he continued, “so we have an obligation to stay open on behalf of our residents who chose to stay or plan on returning in order to keep the facilities operational.”

Magnelli added that MultiVersity Property Management (MVPM, LLC) is launching a fund that will provide relief to residents of their communities. According to a statement sent by Magnelli, the MVHP Resident Helping Hand Fund has been created to provide financial relief to residents that have been adversely impacted by the coronavirus.

“The fund shall endeavor to raise additional funds to help expand our relief efforts for our student-residents,” the statement reads. “Each resident with a demonstrated financial need for the 2020-21 school year will be able to submit a written request in a format provided by the fund for assistance.”

According to the statement, the fund identifies tuition, rent and textbooks as costs that qualify for assistance. Further information and details about the fund will be released in the coming weeks, Magnelli said.

ORIGINAL STORY (April 13) — Campus closures have forced many students to return home as they continue their studies online, but what does this mean for those who live in off-campus housing?

With nearly 10 million Americans filing for unemployment (including many college students), April 1 was sure to be a difficult day for apartment tenants. According to CNN, 31% of American renters didn’t pay their rent this month.

Many students who have leases with off-campus housing complexes are still expected to pay rent, even though many of them have left their Slippery Rock apartments to return home. Many of these students were employed on campus or were laid off because their employers had to close business and currently don’t have a source of income.

Stonecrest tenant and SRU student Delaney Shaffer was working on campus for the WSRU-FM radio station and the Office of Student Conduct. She said she’s still receiving her stipend for her position at the radio station, and she’s doing alternative student work eight hours per week, but her current income isn’t enough to pay her rent.

“I thought ahead and saved up enough to pay this month’s rent,” Shaffer said. “But I don’t have steady jobs like I had on campus anymore.”

Shaffer said all Stonecrest tenants received an email March 25 stating that they must continue to pay their monthly rent to the best of their abilities. If they cannot pay rent, they must submit documentation outlining why they’re unable to pay (e.g. job furlough, layoffs) and a payment plan. Depending on the individual’s situation, Shaffer added, all late fees will be waived as well.

“It just doesn’t seem right that we have to pay for something that we’re not using right now,” Shaffer said.

Stine Evenstroem, an SRU student from Norway, said The Ivy at University Village is still charging the full rate for rent, including charges for closed amenities like the clubhouse and volleyball court. She added that there is an additional $20 service fee when paying online, which only further inconveniences tenants like her.

“I have to use my Norwegian card because I don’t have checks in the United States,” Evenstroem said. “I have to pay online — I don’t really have a choice.”

She added that the COVID-19 pandemic has impacted the economy in Norway as well, which has caused the value of its currency to increase. She said one U.S. dollar is normally equivalent to nine Norwegian krones (NOK), but because of the coronavirus’s impact on the economy, it’s increased to 12 NOK per USD.

“Because I’m paying for my apartment in U.S. dollars while my bank account has Norwegian currency, I’m paying $200 more than I normally do with the currency change,” Evenstroem said. “That money could’ve gone toward other things like groceries.”

She said she was working on campus for Athletic Communications, but with campus being closed and all campus sports being cancelled indefinitely, she doesn’t really have a job. Her only source of income now, she added, is the money she receives from the Norwegian government that goes toward her education, housing, groceries and other necessities.

“I was able to pay this month’s rent with the money from the government, and I’m confident that I’ll be able to continue paying rent for the rest of the semester,” Evenstroem said. “I just don’t think it’s right that University Village isn’t doing anything to help us out.”

SRU student Alyssa Smith said she recently moved out of her apartment at The Grove because she could no longer afford to live there. She said The Grove is still expecting all current tenants to pay the regular rate for rent, even though amenities such as the fitness center and clubhouse are closed.

“It really speaks for itself,” Smith said. “It shows just how little they actually care about their tenants. A lot of their tenants are students, who can barely afford rent as it is.”

Meagan Reed, general manager of The Grove, said she cannot provide any express comments, but shared a statement from The Grove’s ownership.

“Thank you so much for reaching out,” Reed said via email. “We hope that you and everyone are staying safe and healthy. During this challenging time for all, we are not providing any specific comments, as we are working hard to support and stay focused on our residents.”

University Village and Stonecrest did not respond for comment. 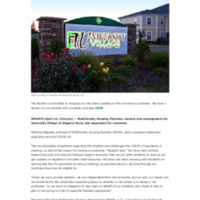