This story was originally published in the campus life section of The Rocket's website, theonlinerocket.com.

In a hard time such as this, and with Easter fast approaching, religious student communities are continuing to do their best to pass on the word of God.

During a typical week on campus, The Harbor, a Coalition for Christian Outreach (CCO) campus ministry, meets on Wednesday evenings in the Smith Student Center. The group talks before listening to context for their reading later in the meeting. The members then break into smaller groups and read through a passage of the Bible, typically discussing and interpreting 10-15 verses afterwards. The readings are meant to be applied to the students’ lives and the Slippery Rock campus.

On a weekly basis, Cru, another religious student community, who sometimes collaborates with The Harbor for events, does men’s and women’s bible studies, usually on Thursday nights in ATS.

Neither The Harbor or Cru have given up on their weekly meetings.

“It’s been a whirlwind for everyone, especially the leaders,” said Lilly Beck, a fifth-year senior social work major and animal-assisted interventions minor who is a Harbor community member who used to be on the organization’s leadership board. “Because they’re still striving to connect with people that they’ve either just met or to make friendships.”

Cru has found a way to include other northwestern Pennsylvania colleges and mission trip partners such as Clarion, Penn State-Behrend and Edinboro. Micah Garber, a junior biology major and the president of Cru at Slippery Rock, said that the organization is taking advantage of the extra time that Zoom meetings allow.

“What’s cool about it is we all just hang out then afterwards, just to catch up and get to know one another,” Garber said.

“Moving to virtual club meetings have definitely been an adjustment for us,” said Ally Velcko, a junior plastics engineering technology major at Penn State Behrend, who has participated in the meetings. “However, it has provided opportunities […] to build a community across northwestern Pennsylvania and interact with students that we wouldn’t have gotten to see on a day-to-day basis when we were on campus.

The Harbor’s community members were challenged by the leaders during the first meeting to reach out to one or two new people every week or so to make new friends.

Transitioning organization events has been the biggest hurdle in adapting, added Beck. The Harbor frequently provides tea to students in the Quad on Tuesdays. “The Dock,” an open mic night held once a semester, usually in the Ski Lodge, may not take place this spring.

Both Garber and Velcko said the Cru community prays that God’s name is glorified and that people will grow because of this time. Garber feels that religion is sometimes used only in times of need.

“It’s like your life vest,” said Garber. “You only depend on it whenever you need help. It really gets taken for granted. I think it’s important 24/7.”

“Just because church services are canceled doesn’t mean our worship is canceled as well,” Velcko said. “Everyday, we are called to live in a way that glorifies God: not just Sundays. We do that by loving others well and serving them the same way Christ did. And, remember, God is in control. None of this has come as a surprise to Him. Trust that He will work everything out for good and that He will be glorified in spite of the coronavirus.”

While Garber feels student-to-student interaction is helpful in community growth, he said that attending mass or bible studies aren’t the most important factors in demonstrating one’s faith.

“My biggest advice would be to just continue to spend time in the world by yourself,” Garber said. “It doesn’t always have to be with other people and that’s where sometimes I think people miss the mark. It’s not about going to church, it’s about your relationship with God.”

Members of Cru are hopeful that the interaction continues once the situation blows over.

“It will be exciting to see how we will incorporate the virtual element of these meetings when we transition back to campus in the fall,” Velcko said. “We don’t have anything planned at this time, but I am hopeful that all of the northwestern Pennsylvania campuses will continue to meet together once classes end.”

Garber offered advice on worshipping during this time, saying that sermons and podcasts from pastors are posted online. He also said that some worship musicians are putting out new music sooner than previously expected.

“A church isn’t simply a […] building,” Beck said. “It’s a community, and I think now is the time to really make those deeper connections.” 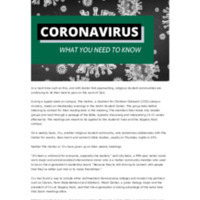