Understanding the economic impact of coronavirus

Understanding the economic impact of coronavirus

Many concerns about the coronavirus remain at the forefront of most people’s minds, with more problems and worries arising as numbers continue to increase. Among these worries are concerns about the short-term and long-term effects that this pandemic may have on the economy.

Sunita Mondal, an associate professor of economics, said the U.S. economy has come to an abrupt halt due to this coronavirus outbreak.

“Due to the extent of the shutdown of businesses and the suddenness of the event, which has caught most households and firms completely off guard, this is having a devastating impact on the economy in the short-run,” Mondal said.

Mondal said the most detrimental short-term effect is job losses. All non-essential businesses in the United States have been forced to shut down, causing the unemployment benefit claims to reach more than 6.6 million.

“Although layoffs have been most pronounced in the retail, hospitality and tourism, restaurants, hotels, airlines, cruises and warehousing and manufacturing sectors, the impact of COVID-19 has been witnessed across almost every sector,” Mondal said.

Because of the course of the virus being unknown, social distancing measures are needed, which stalls economic activity. As long as this continues, Americans will continue to see businesses suffer, and additional layoffs are likely to occur.

Mondal said small and local businesses are particularly vulnerable during this time, as they tend to have low cash cushions.

“Even short periods of economic shutdown tend to have huge negative impacts on small businesses, which will struggle to remain afloat,” Mondal said.

Mondal predicts that if this period of economic inactivity continues over longer periods of time, even medium-sized businesses will find it hard to maintain their current employees, which will force businesses to carry out further layoffs. As a result of all of this, Mondal said economic growth will be substantially lower in the comings months.

“The extent to which such negative effects would persist is harder to predict since the economic downturn is closely related to the course of the virus,” Mondal said.

Mondal said that although financial crises have happened before, this economic situation is much different than the 2008 economic crisis.

“The problems this time are not as deep-rooted in the financial system,” Mondal said. “However, the unpredictable nature of a threat to public health makes this situation far more volatile and unsettling, thus further aggravating the economic impact and making it nearly impossible to forecast the path of recovery.”

Another short term effect of this is the labor shifts. While retail, restaurants and many more establishments have witnessed record layoffs, companies like Walmart, CVS, Amazon and other grocery stores have experienced surges in demand due to the pandemic.

These companies are looking to hire in big numbers right now, but Mondal said this will in no way be able to offset the millions of job losses. She said many of these job shifts will be temporary.

As for preventative measures, the U.S. government has put a stimulus package into effect.

To prevent a prolonged recession, economists recommended providing Americans with a stimulus package to help families, workers and small businesses. But Mondal doesn’t think this will be as effective as they think.

This stimulus package is meant to help people deal with this negative phase. This includes things like expanding eligibility for unemployment insurance, giving checks to households so they are able to pay bills, delaying mortgage payments for loans backed by government-sponsored enterprises and many more measure such as these.

“The Federal Reserve has utilized several emergency lending programs to try and maintain cash flow through the financial system in the economy,” Mondal said. “In an unprecedented manner, led by the economic-rescue legislation signed by the president, they will now have the ability to finance businesses, states and cities.”

The Federal Reserve has also aggressively slashed interest rates in an effort to encourage borrowing and spending in the economy, according to Mondal.

There is a provision in the third phase of the fiscal stimulus package, the Education Stabilization Fund. This would be about $14 billion that would be allotted to colleges and universities, part of which would be used as a direct emergency aid to students and part to be used by institutions in supplementing lost revenues, covering technology costs and more.

“It is difficult to estimate the true impact of this on the institutions, since the details of clauses are hard to determine,” Mondal said.

She said it is important to keep in mind that after the 2008 financial crisis, per-student state funding was lower than pre-recession levels. This means higher education, like many other sectors, will be negatively effected.

“With the funding for public health services being a top priority for state budgets, this is likely going to effect funding for higher education,” Mondal said.

“It is of utmost importance to maintain the current safety nets for financial aid students,” Mondal said.

Mondal said even with all of these imperative measures to attempt to keep the economy afloat, the United States will ultimately fall to have the full extent of the impact, as the U.S. is unable to lift the lock down, which is exactly what is causing economic inactivity.

She said the bottom line is that 6.6 million Americans filing for unemployment benefits, a 3000% increase compared to the pre-pandemic levels, is different from previous recessions. These layoffs, unlike in previous recessionary phases, are due to a sudden, sharp contract in economic activity.

Along with all of these negative effects and worries comes the positive ones. Mondal suggests that there may be an increased appreciation for the simple things in life and things we formerly took for granted.

“Even realizing how much we all enjoying going to work, above and beyond the paycheck associated with work, this realization could lead to improved productivity of workers, once normal operations are resumed,” Mondal said.

Mondal said it all comes back to the same point: if the United States and its government can control the spread of the virus, economic rebound could be faster than after regular recession.

“If the virus is contained relatively quickly, and fear and uncertainty subside, the economy will be able to rebound quicker,” Mondal said. 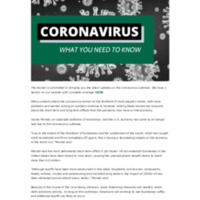